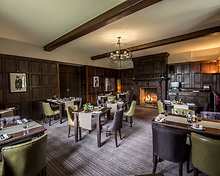 The Court Brasserie at Stonehouse Court Hotel combines the classic charm of the 17th Century Manor with contemporary and informal modern British cuisine, using local ingredients across a seasonal menu, alongside an extensive wine list.

The restaurant takes its name from the properties historical 'Justices Room', where local administration of public justice took place during the 19th century, often presided over by a regional magistrate. Despite this, we can assure you the staff nowadays are considerably less judgmental!

stonehouse-court
Search Offers at this hotel