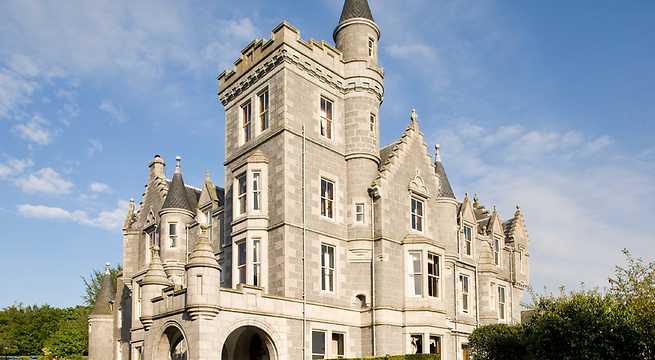 Stay in a Classic room and receive:

Only feature bedrooms are in the original house, the remainder are in an annexe in the grounds. They are very comfortable, but you will need to step outside to get to/from the restaurant and reception.

How to find Ardoe House Hotel and Spa

The hotel is disabled friendly although limited bedrooms available please contact reservations to guarantee the room.

Up to 2 under 12 years of age sleep on complimentary Bed and Breakfast basis in the parents room, Dinner needs to be paid on consumption. Over 12 are considered adults and pay full price.

Children may use the pool during the spa opening hours, under 14's must be supervised by an adult.

Set in 30 acres of Aberdonian Countryside

Ardoe House sits on an estate which was part of a 1,000 acre parcel of land gifted to Arbroath Abbey by Alexander II, King of Scotland way back in in 1244. It has been described and divided throughout the centuries as the sunny half and the shady half.

Ardoe House was built by Alexander Milne Ogston, the son of a successful Aberdeen soap and candle manufacturer known locally as 'Soapie' Ogston. As well as erecting the fashionable mansion house, he beautified the whole estate with plantations. At the time, taking pride in one's Scottish roots was exceptionally important, and much of Alexander's choices for his prized home reflect this.

For instance, the architect he chose was James Matthew, one of the architects behind Drummuir Castle, Aldourie Castle, Ballindalloch Castle, and work on Cawdor Castle. The Scottish Baronial style chosen for Ardoe House was a popular style, first created for a house built for the famous writer, Sir Walter Scott, whose works fired up renewed passion for Scotland.

Pets are welcome, they are charged at £10 per dog per night in some classic rooms by prior arrangement only. Please keep them on leads in the hotel and they are unable to go into the restaurant

Search Offers at this hotel

Full availability
To book by phone, or for help and advice

Book with confidence - best deal guaranteed. If you find it cheaper, we'll refund the difference and give you a £25 voucher. Click for details.
Booking Conditions | ^ Back to top
Accept Cookies